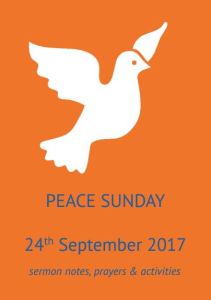 I wrote this reflection on Jonah as a contribution to the Fellowship of Reconciliation's resources for Peace Sunday 2017.


10 When God saw what they did, how they turned from their evil ways, God changed his mind about the calamity that he had said he would bring upon them; and he did not do it.

4 But this was very displeasing to Jonah, and he became angry. 2 He prayed to the Lord and said, ‘O Lord! Is not this what I said while I was still in my own country? That is why I fled to Tarshish at the beginning; for I knew that you are a gracious God and merciful, slow to anger, and abounding in steadfast love, and ready to relent from punishing. 3 And now, O Lord, please take my life from me, for it is better for me to die than to live.’ 4 And the Lord said, ‘Is it right for you to be angry?’ 5 Then Jonah went out of the city and sat down east of the city, and made a booth for himself there. He sat under it in the shade, waiting to see what would become of the city.
6 The Lord God appointed a bush,[a] and made it come up over Jonah, to give shade over his head, to save him from his discomfort; so Jonah was very happy about the bush. 7 But when dawn came up the next day, God appointed a worm that attacked the bush, so that it withered. 8 When the sun rose, God prepared a sultry east wind, and the sun beat down on the head of Jonah so that he was faint and asked that he might die. He said, ‘It is better for me to die than to live.’

9 But God said to Jonah, ‘Is it right for you to be angry about the bush?’ And he said, ‘Yes, angry enough to die.’ 10 Then the Lord said, ‘You are concerned about the bush, for which you did not labour and which you did not grow; it came into being in a night and perished in a night. 11 And should I not be concerned about Nineveh, that great city, in which there are more than a hundred and twenty thousand people who do not know their right hand from their left, and also many animals?’

God calls Jonah to give a prophetic message to violent empire – The wickedness of Nineveh, as the capital of the Assyrian Empire, was its violence and injustice. Israel, and therefore Jonah, regarded the Assyrian Empire as an evil and brutal enemy. Violence and injustice brings its own destruction. It does not require God’s intervention (see Matt. 26:52), whereas repentance from violence and injustice leads to an abundant life. God asks Jonah to call the people of Nineveh to repent of their evil ways and, although he tries to avoid such a difficult and dangerous job, in the end he is successful.

God reveals divine Justice as unconditional love and forgiveness – God’s generous love and forgiveness extends to all people, even those we regard as unworthy or evil (see Ps. 145:7-8 and Matt. 20:1-16). This is what makes God perfect (see Matt. 5:43-48). What does this story tell us about God’s justice? Is it characterised by violent condemnation and punishment or by nonviolent mercy and forgiveness? Is God merely a tribal deity, only concerned about ‘us’, or is God the loving and nonviolent parent of all people and all creation?

Jonah shows us that we find God’s merciful justice hard to accept – As humans, we tend to desire revenge and punishment, rather than mercy and forgiveness. We happily accept God’s love and forgiveness for ourselves but recoil when such love and forgiveness is shown to ‘undeserving’ others. If, like Jonah and Israel, we have benefited from God’s mercy and care (see Jonah 1:17, 2:10 and 4:6, Exodus 16:2-15), should we not respond by offering such mercy and care to others, even those we regard as unworthy or evil? Like Jonah, Jesus was called to bring God’s call for repentance to the very heart of a violent and unjust empire. Unlike Jonah, however, Jesus consistently revealed the nature of God’s justice as unconditional love and forgiveness (see Luke 23:34).

In Summary – The book of Jonah characterises human brokenness in terms of violence, hatred and a lack of mercy – justice understood as violent retribution. The solution to this problem is God’s unconditional love and mercy – justice understood as nonviolent and restorative. This kind of justice is revealed most clearly in the way of Jesus. When we divide the world into ‘us’ and ‘them’ and expect God to forgive and bless ‘us’ while condemning and destroying ‘them’, we perpetuate the very spirit of evil that makes life a hell on earth for so many people. Jonah was spectacularly successful as a prophet, but he simply couldn’t accept the nonviolent and merciful nature of God’s justice.
Email Post