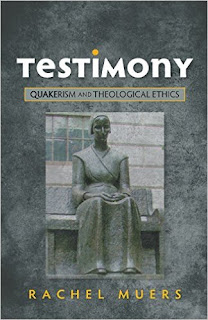 In Testimony: Quakerism and Theological Ethics (SCM Press,2015), Quaker theologian Rachel Muers considers the nature of Quaker testimony through the lens of theological ethics. This book is academic but accessible in style and will be appreciated by Friends and others who wish to deepen their understanding of Quaker theology and spirituality. In particular, the chapter on the refusal of oaths is a tour de force.

I strongly recommend this excellent book and offer the following summary of key points in the hope that it will tempt you to read it for yourself.

2. A General Definition of Testimony


Rachel Muers sets out the following general characteristics of Quaker testimony (pp.7-8). She states that it is:

·    An individual and collective response to God’s leading or call.

·    Something shared, sustained, communicated and developed over time.

·    Located in everyday life rather than confined to a special ‘religious’ context.

·    Conduct or action that seeks to communicate, challenge and transform within a particular context.

·    Based on ‘experiential’ knowledge that is tested by the community and open to revision (p.16)

3. Defines Who We Are

Muers suggests that testimony has been important in defining Quaker identity and forming Quaker community (p.5), however, she also points out that the description of testimony in terms of ‘lists’ (e.g. peace, equality, simplicity and truth) is a relatively recent innovation, emerging during the twentieth century. She argues that testimony displays both continuity and change over time and that “at its best, Quaker testimony calls members of this community to read their past as a preparation for discerning their present and future calling” (p.26).

4. A Response to Divine Encounter

Testimony emerges as a response to the encounter with God in Spirit. It is our answer to the guidance or promptings of God within us (p.101). Since the ‘ground and spring’ of testimony is our encounter with God, it can regarded as action and speech at the cutting edge of revelation (p.20). Over time Quakers have experienced an on-going sense of being called, gathered and having their condition spoken to (p.20). For early Friends, testimony represented an attempt to live in the same kind of relationship with the risen Christ that had transformed the lives of the apostles and the early church (p.39). This assumes that a direct experience of God’s saving power will be inextricably linked to changed visible patterns of everyday life (p.16). The Light is something that we come to know, see or believe in and our action is prompted by its illumination (p.43). Therefore, the task of testimony is the task of speaking and doing God’s truth, of coming to the Light and walking in the Light (p.45).

For a community with a long-standing commitment to peace and reconciliation, it can seem incongruous that Quaker testimony has often been adversarial, confrontational and negative (p.54). The negative nature of testimony is about a sustained enacted opposition to some power or structure of thought that claims to shape and uphold the world but in fact destroys it (p.58). Testimony is therefore a collective, learned and storied process of ‘doing the truth’ and opposing lies that systematically conceal, suppress or silence the complex reality of the world-before-God (p.63). Because of this testimony has often taken the form of a double negative – a denial of a lie (p.21). Two examples of this:

Sexuality - the 1960s publication Towards a Quaker View of Sex was a piece of negative testimony aimed at denying the lies being told in the society of the time about what was and what was not ‘normal’ and ‘healthy’ human expressions of sexuality (p.168)

Sustainability – Proclaiming that, when humans assume that they own and are sovereign over the non-human creation, this is a systematically enacted falsehood that needs to be challenged (p.183).

Testimony can be understood as a form of repentance. It is an action of interruption, denial or refusal, rejecting current circumstances without yet knowing what the alternative might look like (p.65). This reflects a reticence about how knowledgeable we really are. It assumes that, although we can know and understand evil within the world, we cannot fully know or understand God. This leads us to a negative form of testimony and what Muers calls an apophatic theology (p.59). In kataphatic spirituality or ‘via positiva’ God is described in positive terms (i.e. God is this or that). In apophatic spirituality or ‘via negativa’ God as mystery is defined negatively (i.e. God is not this or that).

Negative testimony leads to positive testimony. Muers suggests that sustained negative practices of refusal give rise to new positive forms of practice. These might be called ‘holy experiments’ (p.81). We deny or refuse what we know in order to do something that is not yet fully known. Such denial or refusal interrupts established patterns and assumptions and makes space for alternative possibilities (p.59). In this sense testimony is future-oriented and open-ended. A testimony ‘against’ something leads to actions that express the hope for positive change (p.85). For example A Quaker View of Sex challenged powerful assumptions about what was ‘natural’ and healthy that wielded power over people’s lives and bodies. This created space for the development of alternatives (pp.165/6).

Quaker testimony tends to operate at the point of confrontation between the truth of God and the dominant untruths of a world-opposed-to-God (p.46). Historically, testimony has prompted Quaker to set themselves against any power structure or pattern of life that denies or obscures divine truth (p.118). Quaker stubbornness is not just the result of bloody-mindedness. At its best it is the result of refusal to sacrifice truth to power (p.198). Friends have tried to critique any attempt to make religion fit into a politically convenient box, particularly where this has the effect of creating more outsiders and eventually more victims (p.150).

In the Quaker refusal of the oath we see a conflict between the truth of God and the falsehood of the world. An oath is a symptom of a problem masquerading as a cure (p.113). For early Friends, an oath presented them with a choice between the temporal authorities of this world and the authority of Christ as Lord (p.116).

Testimony acts as nonviolent, self-involving communication that ‘wins’ by persuasion rather than coercion. It offers itself freely to be interpreted and misinterpreted by those who see and hear it (p.103). So testimony is fully incorporated into daily life. This is a life that ‘speaks’; it is speech, but it is speech that ‘lives’ fully embedded in a particular context (p.99).

Testimony presents itself to the world and calls forth a response from those who hear it and see it (p.99). It relies on the response of others for its interpretation and reception, much like vocal ministry (p.104). Again, this reflects a focus on ‘entreaty’ rather than ‘contention’.

Because it relies on the response of others for its interpretation and reception, testimony is inherently risky and uncertain. For example, James Nayler’s story reveals the ambiguous and risky character of testimony. This includes the possibility of being misunderstood, rejected, suffering and dying or being found to have been wrong (p.146).  In addition, we might expect good testimony to look odd and threatening and we might not expect its impact to be immediately apparent (p.190)

Quaker testimony tends to undercut simplistic understandings and reveal the complexity of situations. For example, John Woolman’s simple living and single-eyed knowing made his world more complex. For him, there was no escaping the reality of the situation. His insights restored a sense of the complexity of the world and the real evils caused by people’s inability to face that complexity. In this sense, he shows how truth is more complex than the lies we live by (p.180). Similarly, Quaker testimony has also made the connection between small-scale untruths and the ‘bigger lies’ within our social and spiritual lives. An example of this might be the way small-scale haggling is linked to global unjust economic practices (p.84).

In practice, testimony is always specific and situated. The ‘Truth’ is God who is encountered, known, and followed from where we are. So what matters is what we can say from here and now (p.19). Testimony has to be worked out in particular cases and cannot be fully predicted or understood in advance (p.129). Effective and faithful testimony is a matter of case-by-case judgement through a process of discernment, informed by the history of testimony, by the needs of the present situation and by openness to surprise (p.191).

The conviction that every person is enlightened by the divine Light of Christ underlies Quaker testimony as experiential practice (p.41). We all have the Spirit so we can all respond to the testimony of others by turning to the Light within ourselves (p.100). In addition the commitment to an experiential engagement with ‘that of God in everyone’ enables a way of speaking truth that, while it addresses and challenges power, does not simply repeat the dominant ways in which power is exercised and the methods by which success is measured and achieved (p.205).
Email Post