Personality and Place: The Life and Times of Pendle Hill by Douglas Gwyn 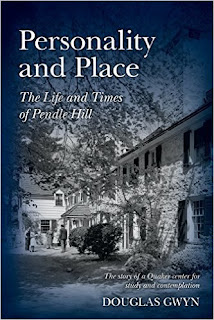 In this detailed and engaging book, which is suitable for both scholars and the serious but non-academic reader, Douglas Gwyn has produced a work that offers something far more complex and wide-ranging in scope than a simple history of a Quaker institution. He describes his approach as historical theology, which “…examines how religious ideas, ideals, and practices have evolved over time through a particular institution, interacting with changes in the wider culture’ (p.vii). There are many riches on offer here. In addition to a detailed timeline, an extensive bibliography and comprehensive indexing, there are chapters on the social and religious context in which Pendle Hill was founded and on its first six years (1930-36), three chapters on ‘the Brinton years’ (1936-1952), indicating the importance of this period, and a chapter for each of the remaining six decades from the 1950s to the 2000s. Finally, in an appendix, Gwyn provides a short comparative analysis of Pendle Hill and Woodbrooke Quaker Study Centre, with an emphasis on how these two institutions have responded to changing circumstances over time and, in particular, the challenges of ensuring on-going financial viability. Throughout the book and at each stage of its history, Gwyn highlights the significant place that publishing has played in the life of Pendle Hill and he offers a number of concise but informative profiles of notable individuals associated with the community whose lives and writings have been influential among Friends in North America and beyond. These include profiles of Rufus Jones, Henry Hodgkin, Anna Brinton, Howard Brinton, Parker Palmer, Sandra Cronk, and Chuck Fager. In many ways, this story of the life and times of Pendle Hill represents a fascinating case study about how groups establish and maintain counter-cultural intentional communities within a wider society which is unsympathetic and often actively hostile to their values. In particular, to use a common Quaker phrase, it raises key questions about how such a community can successfully negotiate the challenges, dangers and obstacles of being ‘in the world but not of the world’. In this study, Gwyn considers such matters at three main levels: how does the community provide a sustained and practical alternative way of life to the rest of its faith community and to the wider world; how is the community impacted by the dominant economic, social and political forces that surround it; and how is its life impacted by changes within its own denomination?

In terms of offering a positive alternative to the world, Gwyn notes how Pendle Hill was founded and sustained by a Personalist philosophy and a strongly communitarian ethic, making the community a tiny residual enclave of Penn’s ‘Holy Experiment’ (p.2). In particular, the life of Pendle Hill has been characterised by a monastic-style combination of work, study and worship that seeks to engage the mind, body and spirit of those participating in its daily life (p.18). In the context of the domination of Capitalist economic relations, the community has focused on nurturing people and relationships within the confines of a specific place in opposition to globalised commodification. By this lived witness it has proclaimed, contrary to the logic of the market, that social capital really does matter (p.15). Gwyn concludes that ‘the Brinton era was surely the classic period of Pendle Hill’s eighty years, a heroically anti-heroic time of prophetic counterpoint to the global cataclysms of depression and war’ (p.433/4). He argues that, in this sense, Pendle Hill has been an on-going experiment in the life of the transcendent reality and not some kind of theoretical utopia (p.434). Inevitably, despite its counter-cultural ethos, the community has found itself influenced and, in some cases, dominated by the powerful economic, social and political forces that surround it. As well as telling the story of Pendle Hill, Gwyn uses this narrative to trace key aspects of twentieth-century American history (p.439). In particular, the impact of the twin crises of World War Two and the Vietnam War on the life and mission of Pendle Hill is clearly hard to over-estimate. Gwyn acknowledges that all places are socially constructed (p.10) and that the relationship between the Personalist philosophy of the community and the Capitalist commodification of nature and human activity in the surrounding world has been an on-going tension and challenge (p.13).

It is also the case that a faith-based intentional community will be shaped by the characteristics of its own faith community and how these change over time. Gwyn notes that Pendle Hill has exemplified some of the limitations associated with the social and ethnic profile of the wider Liberal Quaker community. In particular, this has led to a real and sustained failure to adequately address issues of racial justice and inclusion. In addition, changes in the culture of American Liberal Friends has been reflected over time in a general shift away from an intellectual world-changing focus on economics and historic Quaker concerns towards a more individualistic, therapeutic and pluralist approach (pp.444-445).

A persistent theme in this story is the community’s struggle to survive within an economic and political environment which is not sympathetic to its ethos and values. It seems inevitable that this has revealed itself at times in a division between those who have explicit responsibility for the organisation’s governance, and are more inclined to follow the path of pragmatism and realism, and those whose principal loyalty is to the alternative vision of the community, who resist any perceived watering-down of this vison. Gwyn suggests that during the 1970s and 1980s in particular, there was a community versus institution tension in which the community had a more idealistic/utopian identity compared to the pragmatic and rationalizing imperatives embodied by the institution (p.436). It seems that such tensions between potentially competing visions of the institution’s future and survival are likely to remain pertinent for the foreseeable future.

In considering what the ‘angel’ or collective gestalt of Pendle Hill might be, Gwyn concludes that the community has represented ‘a Quaker/pacifist/personalist experiment that, although diminished over time in its visionary clarity, is still potently experienced in its effects upon participants’ (p.432). Clearly, over its eighty-year history, Pendle Hill has successfully equipped and strengthened individuals, enabling them to resist, reform and even revolutionise the world around them (p.433). For example, the fruitful partnership between Pendle Hill and the American Friends Service Committee has made a significant impact in addressing the imperialism and military-industrial establishment of American society, exemplified especially in the influential 1955 publication Speaking Truth to Power (p.435). And what of the comparative position of Pendle Hill and Woodbrooke, given that the former was modelled in part upon the latter? Both have experienced life-threatening institutional crises, but the institutional responses have been somewhat different. Gwyn implies that although the reshaping of Woodbrooke has been successful in terms of financial and business viability, this has been at the expense of a reduced emphasis on the joys of community life and, by implication, a less visible imaging of an alternative way of living (p.464). He therefore recognises the value in Pendle Hill’s sustained commitment to longer-term residential programmes and to the proto-monastic mix of worship, study and work, even if this continues to make the community’s future look somewhat precarious.

Through this rich and nuanced study of the joys and struggles of a Liberal Quaker educational community set within twentieth- and early twenty-first-century American society, Douglas Gwyn has produced a wealth of valuable material that will engage and fascinate anyone interested in the study of faith-based education, community-building and the relationship between counter-cultural movements and their wider economic, social and political contexts. It should inspire and provoke further research in all these areas.